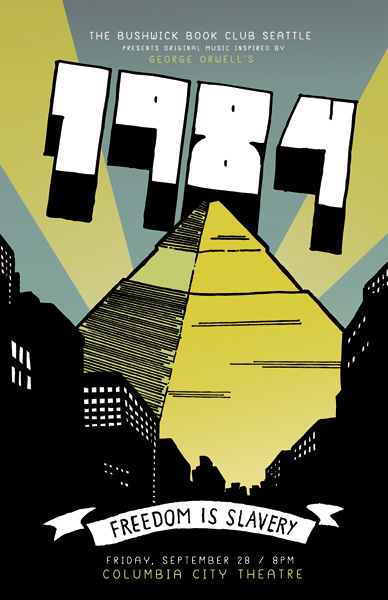 I just picked up a copy of 1984 from the Bellingham library yesterday and haven’t had time to read it yet. So really I have no idea what the futuristic version of 1984 is going to be like, however, here are some fun facts about the actual 1984.

My Dad would say “Where’s the Beef?” every time he farted, it never stopped being hilarious.

Michael Larson won $110,237 on the game show “Press Your Luck” after he memorized the computer-generated patterns used by the game’s board. I went on to say the phrase “No Whammies!” about 10 million times (and counting).

I had several nightmares about my heart getting ripped out of my chest after watching Indiana Jones and the Temple of Doom in the movie theatre. Turns out my Mom was right, I was too young.

I got something for Christmas that year, it was probably some legos or a G.I. Joe toy and I was probably super pumped about it, but I can’t really remember.

I watched the show Three’s Company about a billion times in syndication and still had no idea that it was about a guy who pretended to be gay so his landlord would allow him to live with some hot chicks. Boy was I dumb.

Now that we’ve got those fun facts out of the way, let’s get down to business. I won’t be performing at this show but that won’t stop me from attending. Bwa ha ha! – And it shouldn’t stop you either. There will still be plenty of wonderful 1984 inspired performances to go around. And I almost forgot to mention, that the night will be hosted by funny man extraordinaire Emmett Montgomery. Hooray! I will see you there, but only if you go. 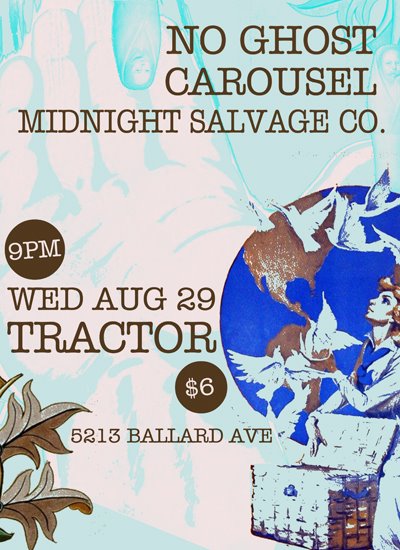 Attention all Rick Weber fans, just wanted to let you know that you can catch him and his drums holding down the beats for his band Carousel one week from tonight at the Tractor in beautiful downtown Ballard. Hooray! 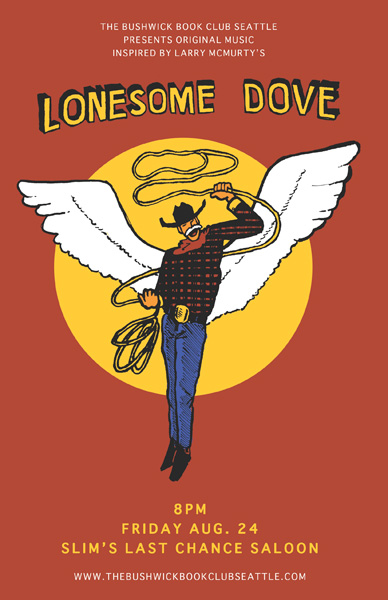 Howdy partners. The Bushwick Book Club is taking a leap into the old west – we are talkin’ cowboys, indians, whores, beans, horses, pigs, lovin’, pokin’, shootin’, hangin’, killin’, and more. I, just like many other talented folks, will be reading the Pulitzer Prize winning Lonesome Dove by Larry McMurtry, and writing original music inspired by the book. In fact, I’m reading it write now as I type this. The show is about a week a way and I’m only half way thru the book at this point – ’bout time I put down this computer and get to readin’. Yeeeeeeeeeeehaaaaaa!

See you there! Hooray!

Jon Smith designed the shit out of this Slash poster 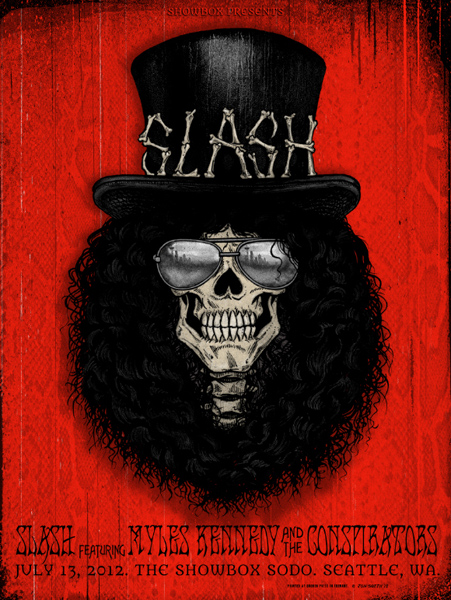 It is a well known fact that Jon Smith is Seattle’s greatest poster designer of all time. This man knows what he is doing. Just look at his latest creation, this wonderfully crafted Slash poster. OMG! And good news, if you want an original print of this beauty they are available in limited quantity right here.

To find out more about what goes into making something like this, Jon will happily explain it to you over on his Blog.

Have a nice day,
Love, MJV

UPDATE: Just got word via Jon’s Facebook page that the Slash posters are now sold out! I hope you were quick enough to get yours.

Travis at the Bushwick Book Club

On February 14th 2012, the Bushwick Book Club put on a show at The Erickson Theatre featuring original music inspired by Jane Austen’s classically tedious novel, Pride and Prejudice. It was a wonderful way to spend Valentine’s Day. Not only did I get to perform in front of the most attentive, well groomed audience Seattle has ever seen, I also had a hot date with a very handsome young lady. She was thoroughly impressed by my powder blue tuxedo, and I don’t blame her. It was a 100% polyester kind of night.

Reading the book was much more of a concentrated effort than I would have liked. It was mostly about dumb girls blathering on and on about stupid crap that nobody cares about. You know, boys, dance parties, horses, cousins marrying cousins… that kind of stuff. Not really my cup of tea, however, there were a lot of memorable characters and it was exceptionally well written, so I can certainly understand the appeal of Pride and Prejudice from that standpoint. By far the best part is the very awkward scene where Mr. Collins proposes to Elizabeth Bennet in a very unwelcomed and overly elongated manner. Even after a series of multiple, yet very polite refusals from Ms. Bennet (everyone was polite in the early 1800s), he continues to present his case for marriage. The longer he goes on, the more certain he becomes that he can change her mind. This goes on for a few pages while the whole time poor Lizzy is thinking ‘Oh God, please stop. Why won’t you stop? Somebody make him stop.’  It was all very awkward and very funny, just like real life. No less than a day later, Collins moves on and successfully proposes to Elizabeth’s fat friend Charlotte. Hooray for settling!

I know what you’re thinking, that sounds like a great idea for a song. I completely agree, but for reasons unknown, I chose to go a different path. The concept for my Pride and Prejudice inspired tune centers around the leading man Mr. Darcy and how even though he was kind of a jerk at times, everyone and their Mom knew (including Darcy himself) that he would end up with the girl at the end. There is also a bit in the bridge about having a bunch of sisters and sleeping on the floor, but you will have to watch the video to get the full backstory on those nuggets of genius. Be sure to stick around for the entire thing as you will be treated to a very special bonus song that I was asked to perform that night. (Not included in the video is when I was sitting in the audience and accidentally spilled a beer on my crotch.)

I am a handsome man and you’re a handsome lady
oh won’t you take my hand ,but only for one dance
then I’ll ignore you
pretend you don’t exist
feel free to yak about my lack of social skills
so disagreeable

200 pages in you still don’t know my first name
I know you’re not to blame, ms. Austen help me out
it is Fitzwilliam the master of Pemberley
You may remember me as the man who’ll take you down

Too many sisters in the room
driving me crazy
especially Katie
Judy, Mary, Dawn, and Amy

You think that I’m a jerk, well I find this surprising
I know you’ll come around and I’ve known it from the start
Standing in front of me
making a mockery
your mom would not agree with the way you use that mouth
mama said knock you out
Mrs. bennet said knock you out 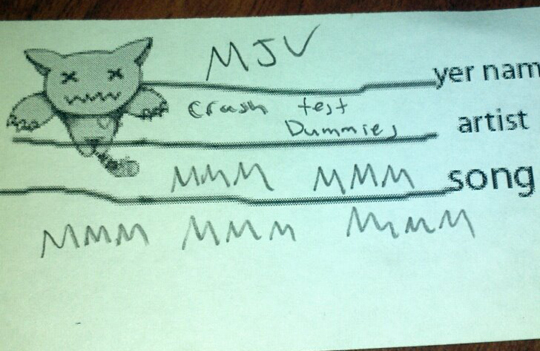 When Canadians aren’t busy buying up all the milk at the Bellingham Costco, they are sitting at home listening to their favorite home town band Crash Test Dummies. Although Crash Test Dummies are not currently and never will be our favorite Canadian institution (that honor goes to Rush), their hit 1993 song Mmm Mmm Mmm Mmm is pretty remarkable. To this day it is still one of my all-time favorite songs (to sing at karaoke). According to Wikipedia, Mmm Mmm Mmm Mmm is frequently included on lists of bad songs. The song was number 15 on VH1’s 50 “Most Awesomely Bad Songs Ever”, named by Rolling Stone as the “15th Most Annoying Song”, and ranked at number 31 on Blender’s list of the “50 Worst Songs Ever”. Any song with that kind of resume must be good. Right?

Over the weekend WE spent some time in the studio to pay tribute to one of the best things to ever come out of Canada. Here is our version of Crash Test Dummies hit song Mmm Mmm Mmm Mmm (you got to love a song title that contains four words and only one letter). Check it out. Look how low my voice goes.

I’ve been having such a craving for playing instrumental rock with weird time signatures and such, that I decided to start another band! So far the band is just me and Ryan Dicker(who is an old friend of WE from way back before my time in the band) and me(Ben), so in order to find some like minded musicians we made a phony sitcom that features some of our music. If you know anybody in the Portland area who would be interested please pass this video along. If not, enjoy anyway! We are planning on making plenty more videos so if you like it you can subscribe to our youtube channel!

Here are some full demos of the songs we have so far! 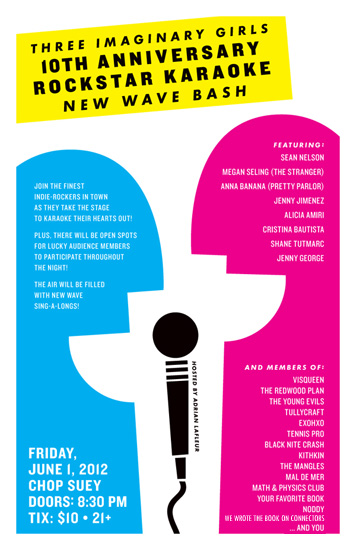 Our favorite Seattle Sparkly Indie-Pop Press, Three Imaginary Girls, is turning 10 years old. Hooray! To celebrate, the ladies will be gathering up all of your favorite Seattle rockers (including WE) in one place for the greatest new wave karaoke bash the world has ever seen… and this is all happening tonight!

WE are very excited to be a part of this event and feel very fortunate to live in a world where Three Imaginary Girls exists. For the past 1o years they have supported the Seattle Music Community like no other. Plus they’ve been known to drop a kind word or two about WE every so often, including this little nugget of joy:

“If We Wrote the Book on Connectors were your little brother, you’d want to pinch his cheeks, get him in a playful headlock and proceed to give him a noogie.”
– Three Imaginary Girls

The Seattle rockers who will be tackling the karaoke mic in the style of new wave include:

It can’t get any more astonishing, right? Well, the rockstars aren’t the only ones taking the mic, we want YOU to sing too! Throughout the night, audience members can volunteer to take the Chop Suey stage by storm to karaoke their favorite new wave hit. Folks will be chosen first come, first served, so get there and turn in your song early.

WE highly encourage your attendance. Come wish the girls a big Happy Birthday!