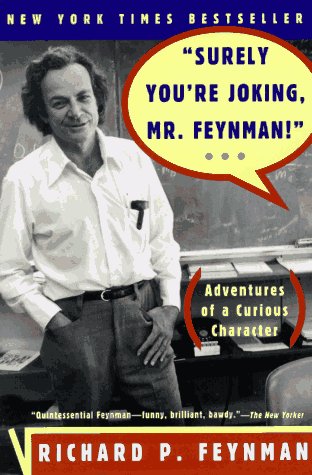 Here is a song I wrote/performed a few months ago for The Bushwick Book Club inspired by a book called “Surely You’re Joking, Mr Feynman!” Now, for those of you don’t know, Richard Feynman was a brilliant physicist who played a major role in inventing the atomic bomb. He also had an unmatched enthusiasm for life and lust for adventure. The book details those adventures as told by the man himself, Richard Feynman. Reading this book was a wonderful experience for me. I highly recommend that you stop whatever it is you may be doing, and start reading it right now. Do it! Now!

The song probably won’t make much sense to you unless you are familiar with the book. But that’s ok. Well, now that I think about it, it probably won’t make much sense even if you are familiar with the book. And that’s ok too. At the time of writing this song my feeling was this. It would be an absolute tragedy to write a song about a physicist without also including mention of the greatest quantum physicsts of my generation, Dr. Samuel Beckett. I can see you all in my mind, nodding your heads in agreement. Good.

And by the way, the next Bushwick Book Club show is on Saturday August 20th at The Conor Byrne. It will be music inspired by The Outsiders (yuk. Not the music, but the book. Yuk). I’m scheduled to perform.

He says “oh boy”, surprised to find
He’s Shaking hands with albert Einstein
His friend Al’s a hologram
That’s why the car can pass right thru him

you think that you’re so smart
Well, I am not convinced
What took you many years
I learned in fifteen minutes
This map of a cat
Will show me the location of the whiskers

Dr. Becket is changing lives
He Answers to a higher power
Setting right what once went wrong
He hopes his next leap will be his leap home