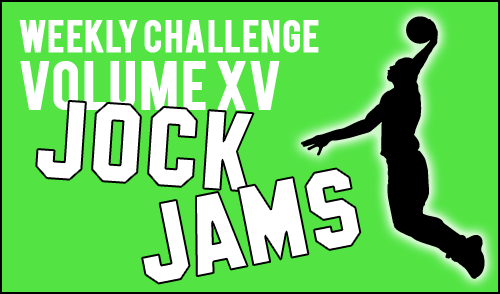 “THE HOTTEST CROWD-PUMPIN’ GROOVES OF ALL TIME!”

That’s what the songbook read. The year was 1995. I was a freshmen in high school and playing the trumpet in pep band for the first time. Little did I know what a transformative period the next few years would be for pep bands across the nation. Our song books consisted of tired Glenn Miller standards and popular high school hits from the 80’s, when our song books came out. It was Pennsylvania 6-5-0-0-oooh and The Tide is High and Hey Mickey, every weekend. Then something happened. Something no one could have expected.

A Gary Glitter song was played at a professional sporting event, and it started a revolution. According to a radio interview, with some Tommy Boy Records executives, that I vaguely remember hearing sometime in the recent past – this all started when they noticed a small trend of enterprising folks trying to get NBA crowds into the game with something newer than the old organ chants. Well, they jumped on producing this trend that went on to wild success for the later half of the 90s – and JOCK JAMS was born.

As legend has it, these producers even ran out of songs that were actually popular in stadiums anywhere, so they began adding songs to the album that no one had really ever heard – but that fit the sound. This resulted in Technotronic, “Pump Up The Jam”, and later was responsible for thrusting the Macarena upon the world.

Within weeks, trap sets were hurriedly added to gymnasiums everywhere. The new coolest kid in school was the drummer. You know who was NOT cool kid in band before this? The drummer. The drummer played the triangle. In fact – suddenly pep band in general was cool.

Well, not really cool. But band cool. New song books were cranked out and slurped up just as fast as our feverish little valve-oiling hands could get at them. It was a BIG DEAL. Rival high schools that didn’t bring their pep band on the road to divisionals? Psssh. Good luck getting your crowd into the game while we’re over here bumpin’ Tag Team, losers.

So, this week the WEekly Challenge pays tribute to those grand times, short lived as they were (don’t kid yourselves millennials – the occasional Hey Ya and F* You every 5 years isn’t the same). Two Class A contenders will be hitting the hardwood with their best effort in this unique genre. Mike “Kent-Meridian” Votava faces off against Ben “Lincoln High” Baier. They’ll leave it all on the court. No second chances, and no regrets. Just like I don’t regret choosing the trumpet over the cornet, which is like a wimpy little baby trumpet, back in 6th grade, so I could stand up like a man in those high school bleachers.

My favorite part of this video is how the text graphic says “Whoot”, instead of “Whoomp”.