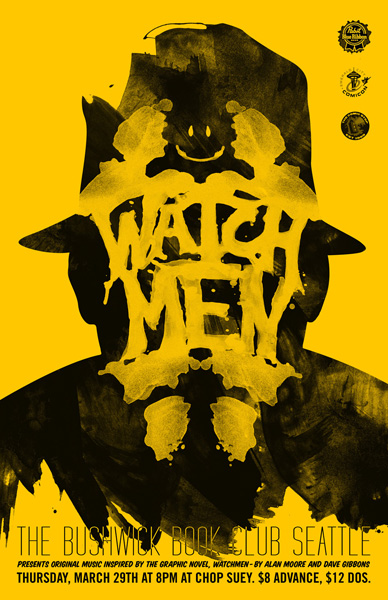 The Bushwick Book Club Seattle is bringing to you original music inspired by the graphic novel Watchmen, and I will be one of the talented people performing this night. Created by Alan Moore and Dave Gibbons in the mid 80s, this book is highly regarded as one of the most important comic books ever made. I read it, I thought it was pretty good, now I’ve got some songs to write. Gasp! The big show is only a few short days away and I haven’t even started working on them yet. What am I to do? Double Gasp!

I think I may be over gasped.

Additionally, on Sunday 3pm, April 1st at The Washington State Convention Center, some of the Bushwick Book Club members, including myself, will be performing our Watchmen inspired songs at the Emerald City Comicon. Look out, nerds!