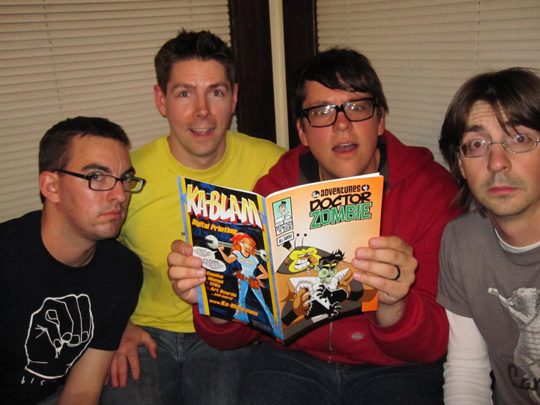 Having just performed at the Emerald City Comicon with the Bushwick Book Club last Sunday, I still have comics on the brain. A while back, the Seattle Comic Book Store Mega Kingpin, Brian Meredith (owner of about a million comic book stores and founding member of the Emerald City Comicon), commissioned WE to make a song about the book he and his daughter, Mackenzie Meredith, write titled The Adventures of Doctor Zombie. It is a wonderful book. There are three issues published to date, and every time a new issue comes out he sends us autographed copies. Oh, the perks of rockstardom. Sometimes after a stressful band practice, WE like to relax by cuddling up with our favorite undead hero (as pictured above).

In an effort to bring about a cure for death, Doctor Archibald Zombie was turned into his namesake by a terrible lab accident, leaving him changed into a brand new version of the undead. Such a horrific accident would have broken a lesser man, but not Doctor Zombie. He just dusted himself off and got back to work.

With his faithful assistant Marigold Murray at his side, Doctor Zombie continues his life just as before: performing experiments and fighting evil in the name of science and humanity. As a consultant for the Roulette City Hall and Police Department, Doctor Zombie is called in for cases that the DHI can’t handle or are too busy with some other catastrophe. He also works as a private consultant for anyone who needs his help.

Doctor Zombie is written by Mackenzie Meredith and Brian Meredith, with artwork by Erik Thompson.

For more info on Doctor Zombie check out their website.

Without further ado, WE present to you in musical format Doctor Zombie.