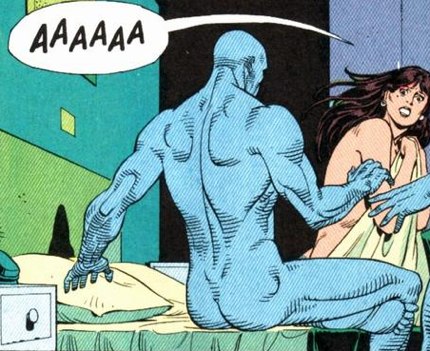 Not being a big fan of graphic novels, or things that I think will be boring, I was very skeptical about the amount of enjoyment I would receive from reading Watchmen. However, since I am a member of the all mighty Bushwick Book Club, and Watchmen happened to be the selected book for the month of March, I read the whole stupid thing anyways. My official review of Alan Moore and Dave Gibbons’ critically acclaimed masterpiece: “Ehh… Not Bad”. I’ve read much worse (I’m looking at you Dark Knight Returns). The book did a nice job of tackling the important issue of what life might be like if you were just an ordinary old man, sans superpowers, that used to spend your younger days dressed up in a ridiculous costume fighting crime. Plus there was a ton of nudity, which is always fun.

The first part of my Watchmen inspired song was inspired by the tender moment in which Laurie Juspeczyk and Nite Owl engage in their first romantic encounter. Yowza! Aaaaoooooooga! The second part of the tune touches on Laurie’s relationship with Mr. Big Blue Wiener himself, Dr. Manhattan. And then there’s the exoskeleton (or lack thereof). Hey Alan Moore, here’s a hot tip for you. If you are going to go through all the trouble of ever so subtly mentioning something awesome like the Nite Owl exoskeleton, you had better make sure that it is properly used to fight the bad guy at the end of the book. What a jip!

Performing the song live at the show was pretty fun. That night I ran into a couple fellows who were participating in a drinking game where they took a shot anytime one of the performers made mention of the blue dong. Apparently, my song got them the drunkest. I’m always happy to help. The video of the live performance is posted below. Feel free to watch me stumble through it. The fact that I’m dressed in all blue was just a hilarious coincidence.

I spent a couple hours recording this song over the weekend when I should have been doing other things, so I really hope you take the time to listen to it. If you choose not to, the chances of your fancy being tickled today will decrease dramatically.