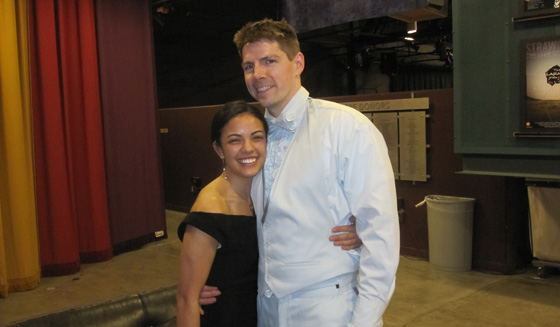 On February 14th 2012, the Bushwick Book Club put on a show at The Erickson Theatre featuring original music inspired by Jane Austen’s classically tedious novel, Pride and Prejudice. It was a wonderful way to spend Valentine’s Day. Not only did I get to perform in front of the most attentive, well groomed audience Seattle has ever seen, I also had a hot date with a very handsome young lady. She was thoroughly impressed by my powder blue tuxedo, and I don’t blame her. It was a 100% polyester kind of night.

Reading the book was much more of a concentrated effort than I would have liked. It was mostly about dumb girls blathering on and on about stupid crap that nobody cares about. You know, boys, dance parties, horses, cousins marrying cousins… that kind of stuff. Not really my cup of tea, however, there were a lot of memorable characters and it was exceptionally well written, so I can certainly understand the appeal of Pride and Prejudice from that standpoint. By far the best part is the very awkward scene where Mr. Collins proposes to Elizabeth Bennet in a very unwelcomed and overly elongated manner. Even after a series of multiple, yet very polite refusals from Ms. Bennet (everyone was polite in the early 1800s), he continues to present his case for marriage. The longer he goes on, the more certain he becomes that he can change her mind. This goes on for a few pages while the whole time poor Lizzy is thinking ‘Oh God, please stop. Why won’t you stop? Somebody make him stop.’  It was all very awkward and very funny, just like real life. No less than a day later, Collins moves on and successfully proposes to Elizabeth’s fat friend Charlotte. Hooray for settling!

I know what you’re thinking, that sounds like a great idea for a song. I completely agree, but for reasons unknown, I chose to go a different path. The concept for my Pride and Prejudice inspired tune centers around the leading man Mr. Darcy and how even though he was kind of a jerk at times, everyone and their Mom knew (including Darcy himself) that he would end up with the girl at the end. There is also a bit in the bridge about having a bunch of sisters and sleeping on the floor, but you will have to watch the video to get the full backstory on those nuggets of genius. Be sure to stick around for the entire thing as you will be treated to a very special bonus song that I was asked to perform that night. (Not included in the video is when I was sitting in the audience and accidentally spilled a beer on my crotch.)

I am a handsome man and you’re a handsome lady
oh won’t you take my hand ,but only for one dance
then I’ll ignore you
pretend you don’t exist
feel free to yak about my lack of social skills
so disagreeable

200 pages in you still don’t know my first name
I know you’re not to blame, ms. Austen help me out
it is Fitzwilliam the master of Pemberley
You may remember me as the man who’ll take you down

Too many sisters in the room
driving me crazy
especially Katie
Judy, Mary, Dawn, and Amy

You think that I’m a jerk, well I find this surprising
I know you’ll come around and I’ve known it from the start
Standing in front of me
making a mockery
your mom would not agree with the way you use that mouth
mama said knock you out
Mrs. bennet said knock you out