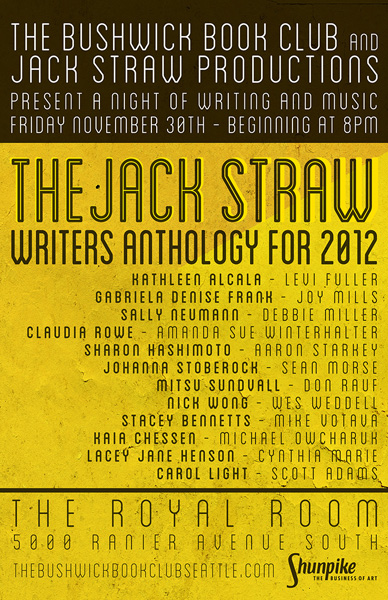 I’m playing this show on Friday!

The Bushwick Book Club Seattle is teaming up with Jack Straw Productions to create original music inspired by the Jack Straw supported writers for 2012. Each artist will doing an original piece inspired by a different story from the a Jack Straw 2012 Anthology.

If you haven’t read the Jack Straw anthology yet I suggest you do so now, you can download it here.

For my song I get to be inspired by Stacey Bennetts’ Trial by Error: Confessions of an Eight-Year-Old Drug Smuggler. Wait?! …eight year old drug smuggler… what?! This is gonna get crazy! I suggest you come to the show, see what happens when I get through with this.

The other writer/artist combos for the evening are as follows: